The bus approaching'll jump-start your conversation

Lovely to see Richard Dawkins and co doing their bit to revive God's profile in the post-Christmas lull. just when the Holy family disappears from our high streets, God returns on the sides of buses courtesy of an alliance of atheists (you couldn't make it up, could you?) 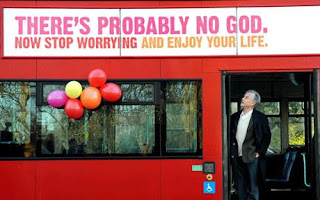 Lovely too that the Theos think tank and the Churches Advertising Network have contributed money to ensure the campaign gets on as many buses as possible.
It's interesting that atheism only has an 'eat, drink and be merry' philosophy. The ad doesn't suggest that because there's probably no God we should get on and help the poor, volunteer at a refugee camp, feed the hungry, sit with the grieving or anything positive.
As Matthew Parris, one of the early supporters of the campaign, said in the Times recently, Christianity is what Africa needs if that continent is going to overcome many of its problems. Interesting that he doesn't apply his incisive logic to the UK!
So the ad is entertaining - after all, it's the brain-child of a comedy writer - but is it really offering a serious lifestyle choice that will make a tangible difference to the lives of the poorest and most vulnerable on our fragile and warring planet?
Posted by simon at 3:06 pm

I love the way they still hedge their bets by saying 'Probably'.

It's gotta be one of the shallowest and short lived philosophies ever conjoured. I must admit I sometimes decide to "stop worrying" and do something selfish to "enjoy myself" but within 48 hours I'm just has depressed as I was before!

It is a mystery why God's peace doesn't seem to last for me but when I do experience it, it just seems so right and has so many positive effects on those around me.