Tweeting with Montaigne and Qohelet

I had an interesting time at Eltham College this morning. I tweeted that I was spending a few minutes with South East London's young elite and I have to say that I was impressed by the politeness of all the pupils (only boys in my lower group group as the girls don't join until sixth form).
I was given a good hearing and very polite round of applause at the end as I swept out in the wake of the gowned teachers (slightly surreal that!) I did roughly the same as I'd done a month ago at a fee-paying girls school. I'd say it went down better with the boys than the girls!
So, here's what I said.... 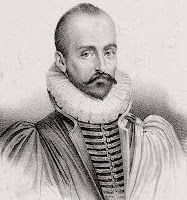 It was a bit of a rush this morning….but I updated my facebook status: doing assembly at Eltham College……made sure my blog was prominently promoting my new book……and tweeted where I was going…off to Eltham College. (actually I tweeted from the college reception as I was a bit early). I am just so new, up-to-date and original! Just like the lovely Stephen Fry here, tweeter extraordinaire. But actually, you know, we’re not so modern….

Meet Michel de Montaigne. Last month he celebrated his 478 birthday – He’s not looking bad for his age is he? In 1572 he began writing essays – like many of you will have to do today! But unlike the philosophers who came before him, they were all about himself. They were status updates; accounts of what he’d been doing that day, what he was thinking about and maybe some useful tips for others about how to live.

But even Montaigne was not original. Not really…2000 years before him another philosopher put down his status updates on how he was trying to make sense of life. We don’t know his name but he was known as ‘the teacher’ and his thoughts are recorded in the book of Ecclesiastes that you can find somewhere in the middle of the Hebrew Bible, what we often call the Old Testament.


He looked at the world and his life in it and drew a lot of conclusions. Like this one – there’s time to do all that we need to do. So if we run out of time, maybe we’re trying to do too much? And this one… ‘what do workers get from all their toil?’ which probably boils down to ‘is what I’m doing worthwhile?’ Hopefully, you’ll gain good grades and a better understanding of the subjects you’re studying as a result of your hard work today.
And he also said this: ‘get in touch with your creator while you’re still young’ because he came to see after all his looking and trying things out that the world made a whole lot better sense when he was in touch with God than when he wasn’t. So looking back as an older man, his advice to the young – those he was teaching – was to look for God in what you’re doing and then what you’re doing will be so much more rewarding and fulfilling
It seems updating our status, tweeting our thoughts, blogging isn’t really as new as we think it is. And, as was true for Michel de Montaigne and for the teacher who wrote Ecclesiastes, it’s so much better to put finger to keyboard when we’ve got something to say that is really worth saying. So, let’s live well today; let’s get in touch with God, be a good friend, help out those who need it and then at the end of the day, when all our chores are done, we’ll have something worth tweeting and facebooking about…
Posted by simon at 12:52 pm

Great Simon, three cheers for Montaigne I say, the best bit of my French degree, except perhaps La Rochefoucauld that is...

I am being introduced to Montaigne by Sarah Bakewell's wonderful biography of him. To my shame I had really not known anything about him but I like what I'm discovering.