A bright, vibrant and surprising Hockney

Yesterday a good friend - who is a member of the Royal Academy - took me to the David Hockney retrospective staged at that venerable institution. And what a blinder of a show it is.

Strictly speaking, it's not a retrospective. There are one or two older works but the exhibition is mainly a showcase for his stunning Yorkshire landscapes produced in watercolour, oil and on his iPad over the past few years. And stunning is what they are. 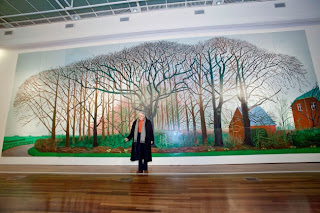 When I was in York last year, I saw his 'Bigger Trees Near Water' (pictured), a forty by fifteen foot monster of a painting - and totally wonderful. There's nothing as big at the Royal Academy show; but there is plenty as stunning.

Bright, bold colours fill the austere space. There is a child-like playfulness about the work that charms the viewer into lingering longer over them that they might have. But something else is going on too. Hockney paints with a wonderful mix of observation and memory that give his landscapes and townscapes an emotional clout. The painting of Salts Mill - where his own work is being given a permanent Yorkshire home - is rendered from seeing it on frequent recent trips and from his memory of it as he grew up in its shadow. The effect is that these apparently simple works draw you in and make you see the familiar in fresh and vibrant ways - exactly as good art should.

But it is the sermon on the mount pictures that are a real revelation - almost in a religious sense - because they are as unexpected as they are wonderful. Taking his cue from Claude Lorrain's seventeenth century masterpiece, Hockney has created a series of works exploring how Claude staged his work.

They are works of epic colour and again child-like wonder. The final study in oil on thirty canvases is seven metres wide and four high. To say it's imposing is an understatement. The tiny figure of Jesus atop a lush orange mountain draws the eye as just about everything else in the picture - human, animal and natural - strains towards him. There is something here that speaks about the quiet authority of Christ in the midst of a big and bustling world. Another study in the room use the child's yellow stripes indicating light emanating from the Christ figure and one has the word 'love' written above him. The effect is to suggest that these are not just studies in form and structure.

If you get a chance to go and see this show, grab it; it's the best exhibition I've seen in London for ages. And I think it seals Hockney's status as our greatest living painter.
Posted by simon at 11:35 am