Arrived at our second stop-over on the journey back - Amiens, possibly our favourite city in North East France. Having wondered around town and around the fabulous canal and water park area, we are getting ready to go and eat at a restaurant overlooking the river - which just happens to be the Somme.

It's an incredibly beautiful town with a lovely cathedral - one that rivals all the good ones, I reckon - and a great atmosphere which I suspect has something to do to the blend of history and the hordes of young people studying at the large university. There's a chilled vibrancy (if that's not an oxymoron) about the place.

Then tomorrow, we top up with wine, hop on the ferry and will be home to swelter in London's heat wave!
Posted by simon at 4:35 pm No comments:

In Chartres at the end of our lovely two week break in la belle France. We have been on the northern edge of the Dordogne, visited Rocamador, Terrasson, Martel, Sarlat and other lovely places. Tonight in Chartres, tomorrow in Amiens and home on Thursday.

Dropped into the cathedral this afternoon but it's still not finished! Well, there's a whole lot of restoration going on which means that half of it is closed. This greatly affects the amount of light in the building and hence the lustre of the windows. A bit disappointing really.

Still, sitting with my feet up before we go for dinner. Lovely
Posted by simon at 5:47 pm No comments:

I've been listening to a song by Other Lives and pondering 9/11. It seems to me these words capture something of what  think about the event and its aftermath.

paper cities
we sent them all across the ocean
many lives were taken
but i didn't cry, i didn't know them
and i just looked on with no expression

this land was once a home
of friends and family
we used to know
they are all gone now
they are now gone
and for what i cannot tell
put down your banners and flags
this war you've made won't last
your country, just lines on a map
they're drawn up, they don't last

and people come together
reminds us we're the same

put down banners and flags
this war you've made won't last
your country, just lines on a map
they're' drawn up, but they don't last
I was in Sainsbury's in Dog Kennel Hill when the first plane hit the tower. Shoppers at checkouts looked uncomprehendingly at TV screens with the sound muted. The buzz of conversation was that there'd been a terrible accident in New York. When I got home and turned on the TV, I knew the world had changed: a plane struck the second tower and seemingly minutes later the whole edifice came crashing down.
Ten years on 300,000 innocent lives have been added to the 3000 that died that day; the world is locked in an apparently never-ending war on terror. Yesterday Tony Blair on the BBC recited the mantras of ten years ago as if we have have not lived the horror of the last decade.
Other Lives' Paper Cities seems to capture something of pathos of these last years.
Posted by simon at 8:37 am No comments:

The day after 50 economists call for a cut in the 50p tax rate, 1,000 economists are urging the G20 to adopt the Robin Hood Tax, a 0.05% levy on every financial transaction.

Also known as the Tobin tax, it's estimated that it would raise 20bn a year in the UK alone. such money could be used to create jobs, invest in the health service and youth work across the nation.

It's good to see that there are some economists committed to the public good. A recent poll carried out by Oxfam suggests that 51% of the UK population think this is a good idea. And the even the IMF, which has reservations about it, has published a report suggesting that it could raise significant sums without unduly affecting the health of the financial services sector.

Email ThisBlogThis!Share to TwitterShare to FacebookShare to Pinterest
Labels: global economy, the economy 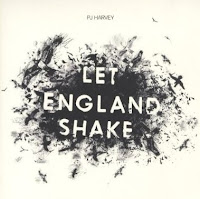 It repays repeated listens and grows richer with each one. So well done Polly Jean!
Posted by simon at 6:43 pm No comments:

Another day, another remedy

Ken Clarke's analysis of the riots is a broken penal system (today's Guardian). He bases this observation on the fact that three quarters of those charged already had a criminal record. He calls for a rehabilitation revolution. Amen to that.

Of course, it's hard to rehabilitate offenders if the economy is broken because a key factor in successful rehabilitation is being able to find ex-offenders jobs on their release. As the economy flatlines and recession returns to most of our overseas markets, and unemployment rises, there are few jobs for those coming out of prison and young offender institutions, so very little hope of a rehabilitation revolution.

The trouble with Clarke's analysis - as with that of Cameron's broken Britain rhetoric - is that it is strong on blaming the poor and weak on helping to put things right. Rhetoric is not what's needed. What is needed is something that addresses the issue of worklessness and the only remedy to that is creating more jobs. And as Keynes demonstrated in the 1930s, when the private sector is incapable or unwilling to do this, the public sector has to step in.

In the medium term, this is cheaper than public support for the long-term unemployed. So the issue is not do we spend public money in this area but how. We can spend vast amounts tackling a problem or we can spend sensibly to prevent it. Creating economic growth and jobs for all seems to be a better way of spending that money than on more prisons and endless mean benefits.

We need more than Ken Clarke's remedy: 'Addressing unemployment means making progress on the economy by getting the deficit under control and pressing ahead with welfare reform and work programmes.' Because his remedy lacks any reference to how jobs might be created.
Posted by simon at 7:50 am No comments:

Email ThisBlogThis!Share to TwitterShare to FacebookShare to Pinterest
Labels: society, the economy

The cost of extraordinary rendition

Bizarrely, plane operators offering rendition flights to the US government have to comply with US equal opportunities legislation. They also have to offer good value for money and submit detailed expense claims which include the sandwiches purchased by the flight crew at various airports around the world.

This information about this hitherto murky world, has come to light in papers posted in a US court by one operator who is suing another in a dispute over payments. I reread the whole sorry saga today (you can do so here) as the news emerged from Libya that our government has been complicit in this trade.

Now we need to be clear what we're talking about here. People suspected of being bad guys are snatched off the streets of the city where they live, trussed up with a sedative inserted in their anus, dressed in big nappies and orange jump suits and flown to destinations in Eastern Europe and the  Middle East where the prison system is expert in enhanced interrogation techniques (that's torture to you and me). It's called extraordinary rendition because that sounds so much better than kidnap for torture.

One such destination was Libya. It emerged in papers found in the ransacked Tripoli prisons that the UK government has been complicit in this trade. And while it's true, as David Cameron told the House today, that this started under the previous government, it seems to have been happening until February this year. This means that while our government has been calling for democracy, freedom and the rule of law for the people of Libya, it has been happy to use the Libyan prison system to extract information from people it suspects of being terrorists, one of whom is now the rebel commander in Tripoli, a man NATO has bombed into power..

Shane Claiborne was great, the Rend Collective excellent and our church was heaving (probably the most people squeezed into it for many a year). But while putting on a good show was important, what matters is what effect the evening will have on the lives of those present.

So since Wednesday I have been having many interesting conversations with people about difference hearing Shane might make to their lives and to the life of the church. And while it's early days, the signs are encouraging.

Not only have I been surprised by the range of people who have told me what a powerful and challenging evening it was, but I have also been struck by the thoughtful way in which people are processing what they heard. Often at such events the response is very emotional and immediate. Sometimes this is good. It seems that the response to this event is more considered; people have gone away asking 'if this is true, what does it mean for the way I express my walk with Jesus at home, at work, in church, etc'

So I had a number of conversations over the weekend about what implications Shane's message might have for home groups, possible social action projects and involvement in mission more generally. This is enormously encouraging. I'm hoping that those conversations will continue and lead to action with Kingdom consequences in the coming weeks.

All in all, I think was a great evening with real potential to lead to lasting change in people's lives and our neighbourhood.
Posted by simon at 9:37 am No comments: