The light dawns over the Nile

Great news from Egypt this evening. As one of the demonstrators in Tahrir Square said 'Pharoah has let his people go'. Let's pray that in the wake of Mubarak's departure, the forces of democracy, justice and freedom are stronger than the forces of chaos and authoritarianism.

One of the things that has been striking over recent days is how president Mubarak has gone from being a key western ally in the search for middle eastern peace to being an obstacle to modernisation and the transition to democracy. I should applaud conversions, however late, but it is a bit rich for those who have kept Mubarak in power to side with his people only when those people seemed likely to get rid of him.

We bang on a lot about democracy but we really do have to be more consistent in our determination to see democracy flourish everywhere. Our selective support for unpleasant regimes does our interests in the world no good in the long term.

But maybe our relationships with the world should always be founded on something more noble than what is in our interest. I know Robin Cook's notion of an ethical foreign policy was somewhat tarnished by the government within which he served, but it seems to me that at the very least we should not expect the people of another nation to put up with a regime that we would not live under just because it's in our 'national interest' defined as militarily expedient or necessary for our economic well-being.

And the Middle East peace process ought to be aided by Arab democracy rather than hindered by it. Israel is always trumpeting its democratic credentials in a region of authoritarian governments. It should rejoice that Egyptians could soon share the same rights. 80 millions Egyptians could be voting alongside 7.5 million Israelis and 10.5 million Tunisians. Who knows, that common experience might help them to listen to and live at peace with one another in the coming years. 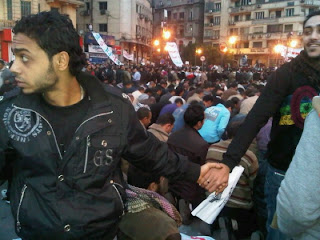 And this is one of the great pictures of hope to have come out of the Egyptian uprising. Last thursday as demonstrators were being attacked by pro-Mubarak factions, Christian Egyptians linked arms and protected Muslim Egyptians as they prayed.

It's pictures like this that give me hope that young Egyptians - the overwhelming majority of the population - will be able to live together in peace and harmony despite their religious and cultural differences.

It's a picture that inspires prayer - and joy.
Posted by simon at 8:41 pm

Email ThisBlogThis!Share to TwitterShare to FacebookShare to Pinterest
Labels: politics