There are some good reflections on the assembly from Catriona here and here. I agree wholeheartedly with her comment in support of those who lead worship in flip-flops (there should be more of us!). Andy Goodliff has commented here; and Geoff Colmer here

I'm also really pleased that she enjoyed our Bible study with Vinoth Ramachandra. It was pretty brilliant. He asked me five minutes before we were due to start whether it was normal for British Christians to turn up at a Bible study 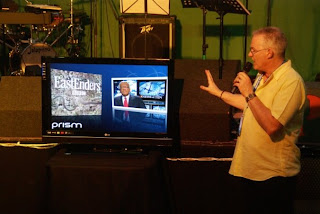 without Bibles! I answered that, sadly, that it was...
Our venue this year was a challenge. They were due to be serving in it up to 9:30am, despite the fact that our morning session actually started at 9:15! It was so light - being a conservatory - that the data projector, so carefully hung on the Friday afternoon, cast an invisible image on the screen and had to be taken down and replaced with a 42 inch plasma screen - as pictured (thanks to Jonathan Somerville for the image) - and by Saturday afternoon, two 42 inch plasmas.
It enabled us to become not only the alternative celebration but also a retro one - so that everyone who turned up could see what we were singing and saying, we produced printed song sheets and sheets with Bible passages and liturgy on them!
Numbers were very encouraging - though sometimes difficult to calculate. Some 300 listened to Vinoth, 200+ broke bread at our celebratory communion, and around 120 gathered each evening to celebrate and chat, learn and share and sing.
I guess the big difference with Prism this year was the music. Sam Hargreaves led a wonderful band, modelled on the Cinematic Orchestra, and using songs from around the world as well as many of his own. They produced a great sound and his sensitivity to where the Spirit was as we gathered was excellent. You can track him down here and access some of his music.
I think we struggled with the venue to begin with and that made Friday evening (pictured above) tricky. But Juliet Kilpin, who shared the teaching with me, was brilliant and the band got us off to a good start.
We anointed the Newly Accredited Ministers with oil on Saturday Evening. Well, I say we did; in fact the congregation did. The gathered body acknowledged that God had called these women and men to serve in ministry in our churches by anointing them as symbol that the Spirit would touch and animate their ministry among us. It was very moving.
On Sunday evening, we had the BMS personnel heading off in the next few weeks to various parts of the world. We were able to speak to each one before praying a commissioning liturgy for them based on Titus 2:11-15. Elaine Storkey spoke really well that evening .
The highlight for me was our communion service on the Sunday morning. Ruth Neve created an outstanding liturgy out of Isaiah 25 that emphasised joy and celebration, in anticipation of the great banquet God invites us to. It was truly joyous and completely rooted in the cross.
So, it all went well. Let's do it all again next year in Bournemouth - only in a slightly better venue!
Posted by simon at 4:45 pm

'Let's do it all again next year in Bournemouth - only in a slightly better venue!'

And maybe I'll get to say 'hello' 'in the flesh' next year.

I arrived late to a Prism session, got stuck right at the back of the bar, and couldn't hear or see a thing - so I left. Therefore echo the 'better venue' thing. And I've also blogged on the Assembly!

Anyway, the pic you got from me, I got from the BU photographer, so credit where it's due.

I loved the bits of Prism i was in for, it reminded me why we are trying to do some of the things we're doing together. I admire yours and Ruth's creativity, and it was a pleasure to church with you there in a way we wish we could here.

Go and have a holiday!